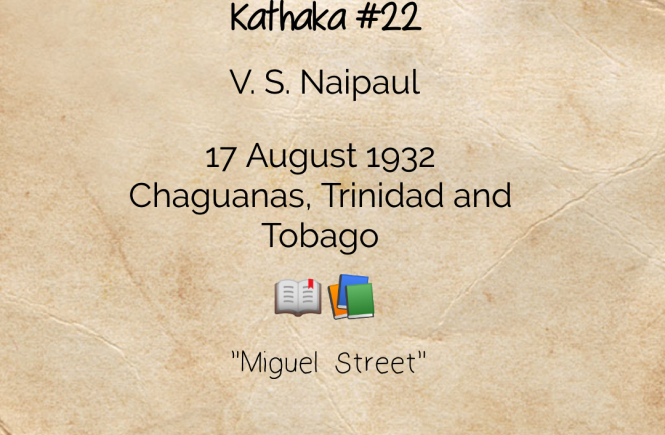 V. S. Naipaul, Trinidad born, British – Indian author who is well known for his pessimistic novels set in developing countries and travel writings. In 2001, Naipaul was honored with Nobel Prize for literature “for having united perceptive narrative and incorruptible scrutiny in works that compel us to see the presence of suppressed histories”. Committee further added “Naipaul is a modern philosopher carrying on the tradition that started originally with Lettres persanes and Candide. In a vigilant style, which has been deservedly admired, he transforms rage into precision and allows events to speak with their own inherent irony.” Even though he was not confident about his skills as a writer, which lead to his impulsive trip to Spain.

He moved to London after his father’s death, where he started working for BBC’s Caribbean Voices. In these days, he started writing stories and sketches based on childhood memories about the people and the neighborhood of Port of Spain. The collection of these sketches with title Miguel Street is Naipaul’s third book which goes published but the first one he wrote. He wrote “Bogart”, his first story from Miguel Street, sitting in BBC freelancer’s room in the old Langham Hotel. V. S. Naipaul writes with prescient wisdom and crackling wit about the lives and legends that make up Miguel Street: a living theatre, a world in microcosm, a cacophony of sights, sounds and smells – all seen through the eyes of a fatherless boy. The language, the idioms, and the observations are priceless and timeless and Miguel Street overflows with life on every page. (From the blurb)

Though there is a chance to look this collection as a novel as it describes various characters and events living in one neighborhood through the eyes of a boy. But while publishing this book, the publisher André Deutsch hesitated over publishing short stories by an unknown Trinidadian writer, as Naipaul then was. Deutsch thought a novel would have more success and encouraged Naipaul to write one. Deutsch published the Miguel Street after Naipaul’s two novels got published. The New York Times said about Miguel Street “The sketches are written lightly, so that tragedy is understated and comedy is overstated, yet the ring of truth always prevails.” I am eager to take a trip to this street with V S Naipaul. Would you like to join in?

Adding this to the amazing bucket of blogs at #BlogchatterA2Z.

Hey guys, last two days you didn’t see me introducing any more author to you. I took these two days to recollect what entire month has offered me as a blogger, writer and most importantly as a bibliophile, a reader. #BlogchatterA2Z

Today, we are at the last stop of our A to Z journey of this 2018 challenge. I would like to introduce you all to Zakaria Tamer, who is a Syrian short story writer. Tamer aka ‘little pea Ziad’ , is one of the most important and widely read and translated short story writer from Arab literary world. #BlogchatterA2Z

Yiyun Li is a Chinese American writer who sets her stories in 21st century China and still believes that her country is “Not Ready” for what she has to say, Come let’s meet her through her book ‘Gold Boy, Emerald Girl’ #BlogchatterA2Z

Xue Yiwei, A Chinese – Canadian storyteller is a maverick in contemporary Chinese literature. He has to leave the country to write his heart’s content. Come let’s meet him through his story collection ‘Shenzheners’

Hello guys, Meet Wells Tower; an American short story writer is a painter of under-recognized feelings. He considers himself as an old-fashioned short-story writer, hoping to keep the tradition alive.

Born to reputed anthropologist couple Alfred Louis Kroeber and writer Theodora Kroeber, Ursula K. Le Guin is an American novelist. Though she crafted her stories mostly as a fantasy or science fiction, her stories were about being human.
#BlogchatterA2Z