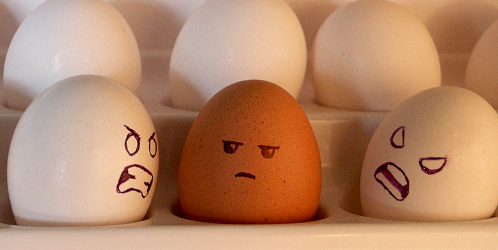 Actually, I was reluctant to talk about all these hate crimes, riots, murders and other violent events in recent past. But today I just couldn’t stop myself from penning my thoughts. There had been series of events like murders of ‘The Voice’ singers, the massacre at Orlando, USA in past month. Even in India, we every now and then read and see about such incidents. Let it be Dadri lynching case or Kairana exodus. I don’t get why there is hatred of this magnitude just because of the difference of opinions.

Every morning, if I open the newspaper, I feel it’s all painted in red. Every page of a newspaper is covered with hate stories, thefts, murders, blasts, rapes and what not. As if its mandate for them to print such negativity otherwise their print license will be revoked. Hardly one or two good news about some good deeds of people, or some updates about art and culture happening around the city pops up in some corner of the paper. These pieces of good news are shown in such a neglected way that most of the time they get passed un-noticed.

On the other hand, digital media is busy managing their TRPs by conducting controversial debates for hours shouting and pointing fingers at each other. Social media is flooded with newly appointed judges of “social media justice system” proving the accused guilty without even thinking twice. Everywhere is the battle of opinions, views, beliefs, and faiths.

Hate is one of the basic human feelings, no one can deny that. But nowadays it has grown exponentially. Sometimes I feel that it is actually a plot of some sci-fi movie where some supervillain is controlling human minds and provoking all this hatred. How can someone hate to this degree that killings and massacres can be thought as a way to deal with a situation. Just because I don’t like your way of thinking or the way you feel about something has become the cause of murder. I am clueless about from where this extreme hatred comes. It appears that violence has taken the official way of expressing one’s hatred about something. Some lunatics will keep brainwashing young minds to use them as their ladder for power.

Some years before this hatred was almost limited to vandalization of property or occasional scuffles between groups of different opinions. But nowadays’ no one talks anything other than taking the life out of human body. It is really disturbing. Most of the time its provoked by some controversial statements by influential people. Social media and digital media blows it out of proportion and it spreads like wildfire.

We all are part of this vicious circle, either a victim of hatred or haters. We just need to take a deep breath and introspect about this. Let’s just be calm and think again.

There are many places in Pune where I gathered pearls of memory. But, now I can never re-visit these places. They are lost to the past. This is one of such places ‘Tea Trails’ cafe on Law College Road, #Pune. #memorylane #LosttoPast #AdisJournalEntry

Recently, I was interacting with a few foreigners about  being a Marathi writer and poet on one of the social media forums. In the discussion they pointed out that Marathi is a minor language from India. On the contrary, it is very beautiful, intricate and culturally rich language with a long tradition of various forms of literature. Through this blog series, I would like to take an opportunity to introduce you to the fine jewels of Marathi literature and culture. Come, join me on the journey of joy of Marathi language.

Like Loading...
September 29, 2020October 2, 2020
Adi Sathe
Creative human needs inspiration, a muse to have that initial spark of creativity. Sometimes, it appears in the form of rains, gorgeous countryside, mountains or...
March 27, 2020
Adi Sathe

It has been days for me turning that page. I put the full stop on our relationship. You know how difficult it is to move on and start a new life.

Food and drinks have always been a major factors for people to have intimate one on one conversations. Amazing and cozy cafes and hotels around town help to create these experiences. I thought of sharing such cozy places through this photo series with the hashtag of #ATableForTwo. Hope you will enjoy these cozy corners and visit them to enjoy the vibe.